Nicotine, a substance so addictive that you can be hooked without even finishing a single cigarette. It only takes 20 seconds for nicotine to reach your brain and gives you the feeling of relaxation. However, as we all know, these feelings come at great cost to your health. From cancer, to lung disease, heart disease, infertility & other prenatal conditions, strokes, low sperm count & motility, skin & teeth issues are just scratching the surface of the damage smoking can do.
In South Africa, the direct-to-customer advertising of cigarettes has been banned for almost two decades. However, this has not slowed the growing prevalence of smoking children and adults.

May 2021 marks the start of No-Tobacco Campaign month, where various organizations, including the World Health Organization, campaign to spread awareness of the dangers of this drug.

The impact of smoking

Since 2016, every year, more than 42100 of its people are killed by tobacco-caused disease. Still, more than 55000 children (10-14 years old) and 6141000 adults (15+ years old) continue to use tobacco each day. Complacency in the face of the tobacco epidemic insulates the tobacco industry in South Africa and ensures that tobacco’s death toll will grow every year. Tobacco control advocates must reach out to other communities and resources to strengthen their efforts and create change.

Men: Over 26% of men older than 15 in South Africa smoke. Even though fewer men smoke on average in South Africa than on average in medium-HDI countries, there are still more than half a million men who smoke cigarettes each day. It makes it an ongoing and dire public health threat. Fewer men die from tobacco in South Africa than the average, but it still kills over 500 men every week, necessitating action from policymakers. In 2016, the death toll was over 10% of all deaths in the country.

Women: In South Africa, more women smoke than the medium-HDI countries. In 2016 more than 5.5% of deaths were as a result of complications due to smoking.

OTHER RISKS FOR SMOKERS

Buying tobacco robs families of the resources they may need to rise out of poverty. A smoker in South Africa would have to spend 8.07% of their average income (measured by per capita GDP) to purchase 10 of the most popular cigarettes to smoke daily each year.

Cigarette butts are the most commonly discarded pieces of waste worldwide. It is estimated that 10 000 tonnes of butts and packs wind up as toxic trash in South Africa each year. This is roughly equivalent to the weight of 1870 endangered African elephants. Cigarettes also contain many toxic chemicals and is a contributor to global warming and climate change.

People living with mental illness are nearly twice as likely to smoke as other individuals.

Other than being a major cause of lung & heart disease and cancer, smoking also causes many other problems. Smoking stains teeth yellow and can cause gum diseases, such as gingivitis and periodontitis, which cause the gums to swell and bleed easily. Pockets of plaque between teeth and gums can cause tooth decay and lead to tooth loss. Smokers have a higher risk of developing gum disease and various forms of cancer in the mouth.

Leucoplakia: A precancerous condition, leukoplakia appears as a white patch inside the mouth. It is often caused by tobacco use and can be a warning sign of oral cancer.

At Mediwell Dainfern Medical & Dental Centre, you can book or walk in for tests as well as medical advice to help you quit. If you have not had your lung x-rays or tests done, our medical practitioners are trained to do so with the newest technology. Knowing your lungs is the first step in the process of quitting.
Other than a nutritionist who can help with improving your daily diet, you will also get recommendations for counselling and therapies, like the Pocket Couch, which will help you quit to go along with other strategies. Mediwell also houses a dental clinic to help you look after your dental health which is affected by smoking.

COMMIT TO QUIT SMOKING during May and the Anti-Tobacco Campaign Month. 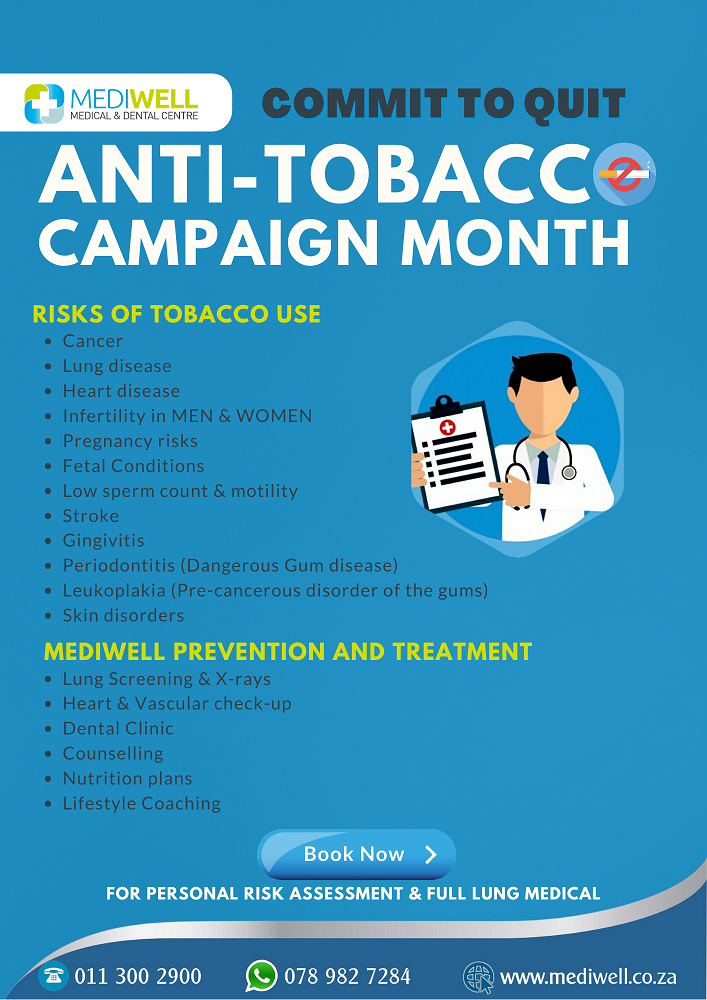